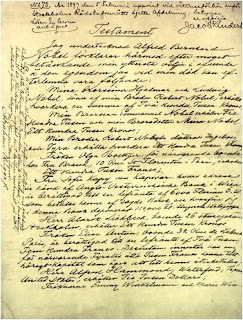 I, the undersigned, Alfred Bernhard Nobel, do hereby, after mature deliberation, declare the following to be my last Will and Testament with respect to such property as may be left by me at the time of my death:


To my nephews, Hjalmar and Ludvig Nobel, the sons of my brother Robert Nobel, I bequeath the sum of Two Hundred Thousand Crowns each;

To my brother Robert Nobel's daughters, Ingeborg and Tyra, the sum of One Hundred Thousand Crowns each;

Mrs Sofie Kapy von Kapivar, whose address is known to the Anglo-Oesterreichische Bank in Vienna, is hereby entitled to an annuity of 6000 Florins Ö.W. which is paid to her by the said Bank, and to this end I have deposited in this Bank the amount of 150,000 Fl. in Hungarian State Bonds;

Miss Elise Antun, presently living at 32 Rue de Lubeck, Paris, is entitled to an annuity of Two Thousand Five Hundred Francs. In addition, Forty Eight Thousand Francs owned by her are at present in my custody, and shall be refunded;

My servants, Auguste Oswald and his wife Alphonse Tournand, employed in my laboratory at San Remo, will each receive an annuity of One Thousand Francs;

Mr Georges Fehrenbach, 2, Rue Compiègne, Paris, is entitled to an annual pension of Five Thousand Francs from January 1, 1896 to January 1, 1899, when the said pension shall discontinue;

A sum of Twenty Thousand Crowns each, which has been placed in my custody, is the property of my brother's children, Hjalmar, Ludvig, Ingeborg and Tyra, and shall be repaid to them.

As Executors of my testamentary dispositions, I hereby appoint Mr Ragnar Sohlman, resident at Bofors, Värmland, and Mr Rudolf Lilljequist, 31 Malmskillnadsgatan, Stockholm, and at Bengtsfors near Uddevalla. To compensate for their pains and attention, I grant to Mr Ragnar Sohlman, who will presumably have to devote most time to this matter, One Hundred Thousand Crowns, and to Mr Rudolf Lilljequist, Fifty Thousand Crowns;

At the present time, my property consists in part of real estate in Paris and San Remo, and in part of securities deposited as follows: with The Union Bank of Scotland Ltd in Glasgow and London, Le Crédit Lyonnais, Comptoir National d'Escompte, and with Alphen Messin & Co. in Paris; with the stockbroker M.V. Peter of Banque Transatlantique, also in Paris; with Direction der Disconto Gesellschaft and Joseph Goldschmidt & Cie, Berlin; with the Russian Central Bank, and with Mr Emanuel Nobel in Petersburg; with Skandinaviska Kredit Aktiebolaget in Gothenburg and Stockholm, and in my strong-box at 59, Avenue Malakoff, Paris; further to this are accounts receivable, patents, patent fees or so-called royalties etc. in connection with which my Executors will find full information in my papers and books.

This Will and Testament is up to now the only one valid, and revokes all my previous testamentary dispositions, should any such exist after my death.

Finally, it is my express wish that following my death my veins shall be opened, and when this has been done and competent Doctors have confirmed clear signs of death, my remains shall be cremated in a so-called crematorium.